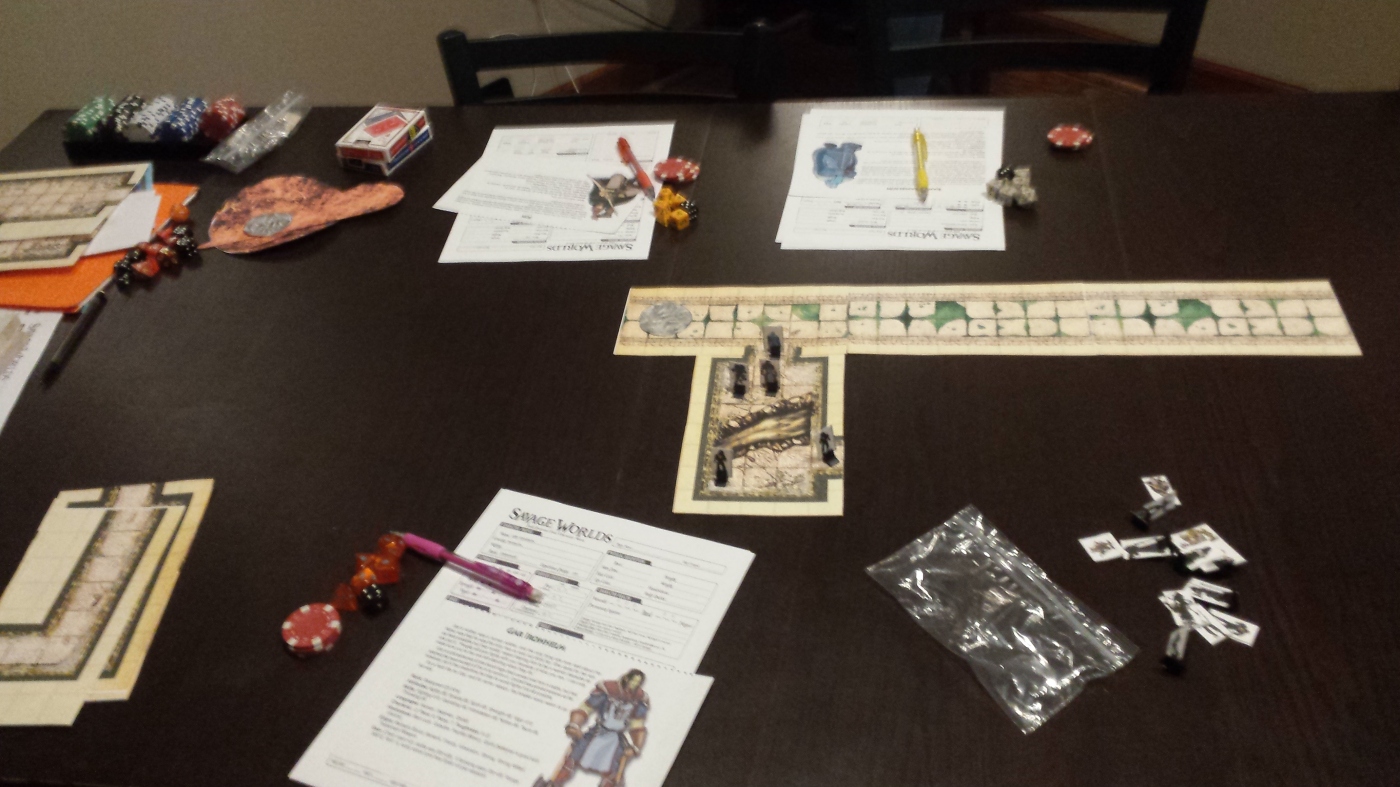 I’d like to know what you homebrew or house rule that is different than the core rules of Savage Worlds, or whatever other system you like. Such as Genesys, as many of my Nerds-International community like (That’s you J.Pierson!), or the Index Card RPG like The Murder Hobo Show has fallen for in recent months.

I’m looking to add this as a new regular column to my blog. Something I can post once a month, showcasing some new house rules or homebrew creation for Savage Worlds and other game systems.

So, what the heck do I do to start this off??

That’s right, Savage Worlds Trappings. They have been covered, discussed and exampled out the wazoo yet they are still the hardest thing for someone new to Savage Worlds to wrap their heads around. I know they kicked my ass and left me confused until I really sat down and read up on them, checked out a ton of examples (some of the best are Zadmar’s wonderful Savage Spellbook). Then I tried it out myself, using my kids home game as a testing ground.

One of my first creations was for my daughter’s character. My daughter was 13 at the time and had been creating this world in her head for her stories. Creating a slew of characters and making all kinds of connections between them. Her favorite character is Lisarra, a half demon, half angel who’s conflicted about her heritage. She is always striving toward the angelic side and tries to suppress the demonic side.

She got bolt as her second advance. To keep with the whole Light vs Dark motif, I trapped her bolt like this:

Lisarra’s Bolt
When cast, Lisarra must choose to cast as light or dark.

Light Bolt
PP Cost: 2 per missile.
This creates a bolt of pure, solid sunlight that does 2D6 damage. It does an additional 1D6 to anything vulnerable to Sunlight or anything considered supernaturally unholy (demons, devils, etc…)
She can cast up to 3 bolts, by spending 2 PP per bolt. This acts just like the normal additional bolts.
She can instead cast a bolt that does additional damage, increasing it to 3D6 (and the bonus damage to 1D8) for an additional 2 power points.

Dark Bolt
PP Cost: 1
This created a bolt of pure darkness surrounded by deep purple energy crackling along its length. The scream of tormented souls fills the air when this is cast. The bolt does 2D8 damage and all within a large burst template (including allies) must make a spirit check or become shaken with fright.
She cannot do additional bolts, but can do additional damage. For an extra 1 PP, she can do 3D8 damage and all within the large burst template make their spirit checks at a -2 to avoid being shaken.

This is not a balanced use of the power. This is a homebrew bolt spell created for my daughter. You see, she has had this now for a few adventures and she has never once used the dark bolt power! She is so into the character’s desire not to succumb to the darker side of her nature that she will not use it, even though it is clearly more powerful.

I made this, knowing that my daughter would likely do just this thing. She may use it when her back is up against the wall and she needs to save an ally, but so far she has resisted.

Another use of trappings came up just recently in the old Savage Rifts G+ community.  (Note: The group has moved over to MEWE.)

Someone wanted to know if there was a way to do a spell that made you impervious to fire or energy.

So I now have this!

This form of armor provides protection against an element rather than normal armor increase to toughness.
When cast, choose the element you want to protect against: Fire, Cold, Electricity.
The recipient is immune to all effects of normal forms of the element. For fire, normal fires do no damage, nor does the smoke created from what the fire is burning. For cold, they are immune to the effects of hypothermia resulting from any normal source (arctic winds, ice water, etc) . And for electricity, normal electrical currents and even a normal lightning strike will do no harm.
In addition, the spell provides enhanced protection against the chosen element type. They gain 4 points of armor vs any attack of that element. On a raise, they gain 8 points.
For settings that use them, plasma weapons would fall into the Fire category.

So there are two homebrew spells using trappings and a little creative thinking.

What have you homebrewed?

It doesn’t have to be trapping related, or even Savage Worlds related. I’d just like to hear what others have done!

2 thoughts on “Do You Homebrew, Bro?”