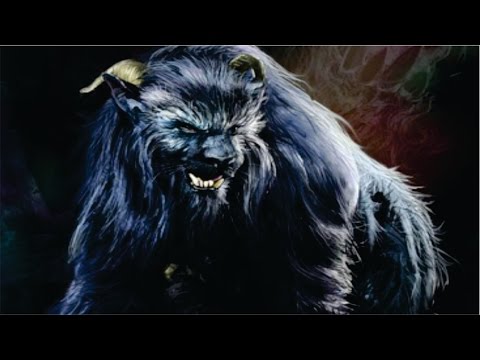 Author’s Note: This series looks at the various North American Cryptids as if they were real, tangible beings that have managed to elude scientific observation. Many of the creatures I will be featuring have appeared in other Savage Worlds products. Often times they have been altered and tweaked to fit that particular setting or to make them more interesting or challenging. My interpretation tries to stay closer to the available lore I could find on each.
I hope you enjoy this series and like my interpretations of these wonderfully imaginative creatures!
NOTE: This is updated to the Savage World Adventure Edition!

The Beast of Bladenboro is a particularly scary cryptid. First reported in 1953 near the North Carolina town of Bladenboro, this beast attacked and killed several dogs and other animals in the winter of 1953-’54. Original reports described this as a sleek, black panther or wolf about five feet in length. The attacks were described as particularly vicious and gory, with the animals torn asunder, their parts scattered around.

As the reports continued to come in, more animals were found with most of their blood drained from them. Some animals were simply decapitated, while others looked to have been violently torn into. A common thread of the attacks is that very little of the flesh was eaten, but much of the blood was gone, as if drained.

Reports mostly died down to just a few scattered mentions by the spring of 1954. Then, in 2007 two farmers that lived more than thirty miles apart reported the beast. The first one had his entire hear of sixty goats killed. All of them had their heads crushed and their blood drained. A few days later, the second farmer reported the loss of his goats in nearly the exact same way.

Since The original 1954 sighting, there have been scattered reports of very similar attacks in several locations along the eastern seaboard and into the Midwest region of the United States. There have even been reports into Mexico and as far south as Bolivia. This has led cryptozoologists to believe the Beast of Bladenboro has grown in number and migrated out of its original hunting grounds.

Attributes: Agility d10, Smarts d6(a), Spirit d6, Strength d8, Vigor d8
Skills: Athletics d8, Fighting d10, Notice d8, Stealth d10, Survival d10
Pace: 8; Parry: 7; Toughness: 7
Special Abilities
*Thick Hide: Their unusually thick hide grants a +1 bonus to toughness.
*Bite: Str +d6
*Blood Drain: The beast can make a bite attack at -2 to go for the throat. If it lands, his jaws lock and the long, sharp, hollow canine teeth begin draining blood from the target. This does an additional 2D6 damage per round and half of the victims toughness, rounded down, is ignored. While locked in, the beast is more vulnerable and less able to dodge, reducing its parry by 2.
*Blood Surge: If the beast successfully drains enough blood to cause three or more wounds, they gain an adrenaline like surge, increasing their Agility, Strength, Vigor, and Fighting by one die type. This effect lasts for 1D4+1 minutes
*Fleet-Footed: Roll a d10 when running instead of a d6.

Hope you enjoyed this delve into the Cryptids of North America!

Until next time,
Cheers!

2 thoughts on “Cryptids of North America: The Beast of Bladenboro!”