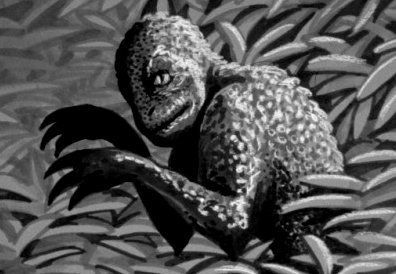 AUTHOR’S NOTE: This series looks at the various North American Cryptids as if they were real, tangible beings that have managed to elude scientific observation. Many of the creatures I will be featuring have appeared in other Savage Worlds products. Often times they have been altered and tweaked to fit that particular setting or to make them more interesting or challenging. My interpretation tries to stay closer to the available lore I could find on each.
I hope you enjoy this series and like my interpretations of these wonderfully imaginative creatures!
NOTE#2: This write up uses the new Savage Worlds Adventure Edition Rules (SWADE).

The first reported sighting of this cryptid was made in 1987. A very tall, reptilian humanoid was briefly sighted walking upright through a marshy clearing. But a year later, in June of 1988, Christopher Davis’ sighting was far more terrifying! While driving home late at night, he got a flat tire. He stopped near Scape Ore Swamp and changed his tire. After changing the tire, but before he had put the jack and tools away, he spotted red glowing eyes several dozen yards ahead of his car. The eyes were nearly seven feet in the air and he was quickly able to make out a humanoid shape as the creature ran towards him. He managed to get into his car just before it reached him. As he was starting his car, the creature, visible from the shoulders down, tried to claw at the door handle to get into the car. The creature was described as a lithe, humanoid with reptilian skin. Its hands had only three fingers, all of them ending in large talons. As Davis started to drive away, the creature leapt onto the roof of his car, clawing at the roof and doors to hold on. It managed to stay on after several attempts to swerve from side to side, finally falling off after he hit the brakes. Davis stated he saw it get up and continue to chase him for several yards after it was thrown from the roof.
The local police had scoured the area of the incident, finding a few tracks of some unknown foot fourteen inches long with three toes. They also noted scratch marks on the roof of Davis’ car and the drivers sideview mirror was severely damaged.
In the months that followed, there were several other sightings, all of them within a few miles of the Scape Ore Swamp.
The Lizard Man of Scape Ore Swamp stands seven feet tall. It has a thick scaled hide, a powerful build and a tail just long enough to rest on the ground when standing fully erect. Its limbs all end in three digits with large talons at the end of each one. The hands have opposable thumbs. There is a frill ridge that runs from just above its eyes to the base of its neck. At its peak, it is about three inches tall. It is believed that this is not one creature, but a species not yet properly cataloged.

Attributes: Agility d8, Smarts d4, Spirit d6, Strength d10, Vigor d10
Skills: Athletics d8, Fighting d8, Intimidation d8, Notice d6, Stealth d6, Survival d8
Pace: 8; Parry: 6; Toughness: 9
Special Abilities
Thick Hide: The Lizard Man of Scape Ore Swamp have very tough, scaly hides, providing a +2 bonus to their toughness.
Claw: Str+d6
Bite: Str+d4
Infectious Bite: Like many large lizards such as the Komodo Dragon and several varieties of iguana, their mouths are full of virulent bacteria and disease. Any bite that inflicts a wound also causes the victim to become infected with a lethal disease. The round that the victim takes the wounding bite, they must make a vigor roll, if failed, they have contracted a lethal disease as described in the SWADE rule book, page 126.

Until next time,
Cheers!