I have always liked the idea of running a game of exploration and investigation of the mysteries surrounding my local community. This would be in the vein of shows like Erie Indiana, Stranger Things, or (to a lesser degree) Scooby-Doo. Also think of movies like “IT”. I love the idea of researching towns in my area for adventure ideas. I look for interesting folklore, odd news stories and the haunted history of towns near me.

I would say any city could do, but older cities in decline would be best. Detroit is a good one. There are entire sections of the city that we abandoned from commercial and residential neighborhoods to large industrial parks all lay empty and crumbling. This provides tons of opportunity to explore run down and abandoned locales. Detroit has a long history of growth followed by almost catastrophic decline.

Smaller cities like Peoria, IL are also prime examples. Peoria is the home to Caterpillar, the makers of large construction and farm equipment. It has been in a steady decline since the early 2000’s. It is over a hundred years old, has a largely run down factory and dock district (a big river runs through town, there used to be a lot of shipping through there and a lot of manufacturing).

Now I’m in the Chicago western suburbs, so I know of two or three towns I could run this in. For wherever you are, think about the communities near you that might fit the bill. Use Wikipedia to do a search on any economically depressed cities near you to get an idea of how abandoned the town may be.

Here’s the town I would use:
Joliet IL, is one town right next to me that actually has not had any mass exodus. It has actually exploded in the last 30 years, its population actually doubling between 1990 and 2010, but it does have a substantial area mainly to the east of the downtown area that has been run down and abandoned. There are old warehouses and factories that are abandoned and the Joliet State Penitentiary (Jake and Elwood are released from it in the Blues Brothers) has been closed since 2002. There is also an old hospital complex that has been largely abandoned since 2012. The Central High School is well over 100 years old, as is the main library branch, both of these and the old Joliet State Penitentiary all use the same limestone and utilize the same architectural style, very gothic; perfect for this type of setting. 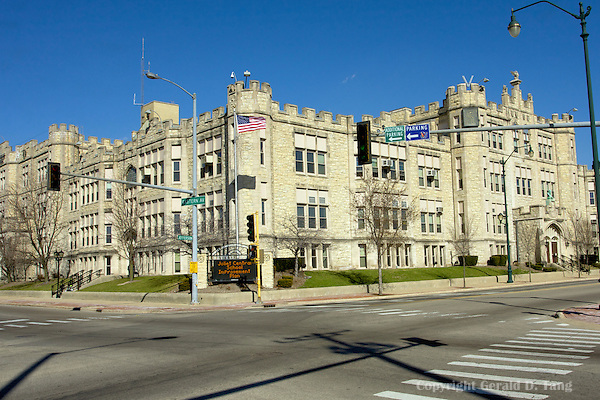 (Above is the Joliet Central High School. The image at the top of the article is Joliet State Penitentiary)

These locations as well as the old Foundry (Joliet was known for its steel mills until the early 1980’s, when the mills closed, unemployment in Joliet was over 20% for several years) all make for great story seeds. The great thing about it being so close, is that I can easily drive by these sites and take a few of my own pictures to supplement those I find online. 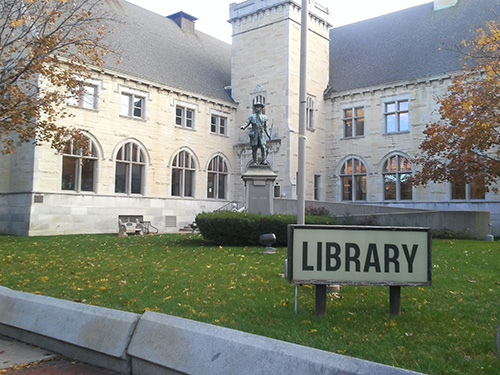 Now I could see doing a campaign based on high school kids age 15 to 18 who learn about the strange and weird history of the city from books and old newspapers found at the main branch of the public library, or in the archives of their school newspaper. The kids could be working on a history piece for the school and start to come across the strange and unusual, leading them to start their own blog and YouTube channel focusing on the strange and unsolved mysteries of the town.

Another approach could be using the Joliet Junior College, the local junior college for Will County, and having all the players be students there, age 17 to 20. I’d keep them under drinking age. In this case, they could learn about the strangeness from old texts or some obscure display in the college, which leads them to the public library or JJC’s student newspaper.

So, that’s what I would do with the city of Joliet, IL. There are other cities and towns within a short drive of me that I could use very easily. There is Aurora, IL, one of the largest cities in Illinois outside of Chicago. Or going off of a top ten most haunted places in Illinois, we have the cities of Naperville, St. Charles, Decatur, and Carbondale. All of these towns are within about an hour’s drive from my home and all of them have a rich history that could easily help spark some really great mystery storytelling!

Do some research; I’m certain most of us have similar old towns past their prime that you could set up as your setting location. Start by thinking about what you know of your hometown area. Are there any towns with long histories? Are there local ghost stories or old Indian legends interwoven into the history of your hometown or a nearby neighboring town? Take what you know and look up the towns on Wikipedia for a quick overview of the town. Then do a little Google searching for anything unusual or interesting. In no time at all, you will have the beginnings of your own Stranger Things, Goonies, Scooby-Doo, Erie Indiana, or Riverdale styled campaign.

Let me know what towns near you would be good for this type of game!