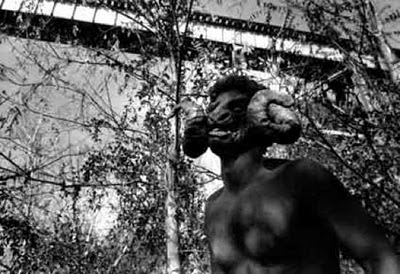 Urban legends of this cryptid have floated around Louisville, KY for decades. Said to be a half goat, half man creature, it stalks the area around the Pope Lick Railroad Trestle. Some reports state the goat-man can hypnotize and use vocal mimicry to lure people out onto the trestle shortly before a train comes along, causing them to be killed by the train. Others state that the creature will leap off the trestle to land on cars travelling on the road below.
All reports have the creature standing roughly six feet tall with the waist and legs of a goat and the upper torso and head of a man. Large rams horns crown the creatures head.
To date, there are several deaths on and near the trestle that are blamed on the Pope Lick Monster.

AUTHOR’S NOTE: This series looks at the various North American Cryptids as if they were real, tangible beings that have managed to elude scientific observation. Many of the creatures I will be featuring have appeared in other Savage Worlds products. Often times they have been altered and tweaked to fit that particular setting or to make them more interesting or challenging. My interpretation tries to stay closer to the available lore I could find on each.
I hope you enjoy this series and like my interpretations of these wonderfully imaginative creatures!
NOTE#2: This write up uses the new Savage Worlds Adventure Edition Rules!

Special Abilities
Gore: Str+d6
Fear: Anyone seeing the creature must make a fear check and these creatures gan a +2 to any intimidation checks.
Hypnosis: Works like puppet power, using the Power Use skill for the check. Can use once per target per day.
Ventriloquism:  Works like sound power. Cannot use the silence part of the power. Can use once every other round.

If the players are seasoned or higher, the goatman should be a wildcard rather than an extra.