I love board games. I really, really do! I also love Halloween. The time from mid September through mid November in general is my favorite time of year. I love the changing leaves, the cooler nights and Halloween.
I have passed my love of board games and Halloween to my daughter (less so the board games, more so Halloween) and I’ve even managed to interest my son, whose fortnight obsession has made getting him into non-electronic games an uphill battle.
This post I am going to combine my two loves and present to you some of my favorite Horror themed board games. I will list them in age appropriate order, with the ones at the top for younger family members to the games at the bottom good for older family members (tweens and teens).

So, step away from your phones and tablets, put the tv remote down and gather around the dinner table to play some games with the family.

Note: This article does include affiliate links that direct you to Amazon.com. If you use these links and make a purchase on Amazon, I will get a small commission. Thanks! 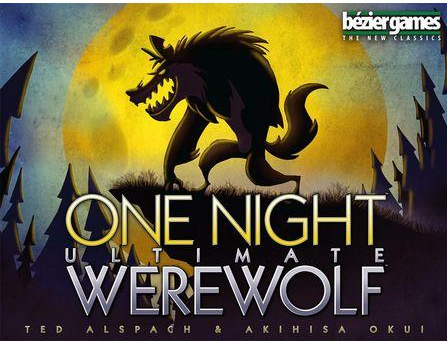 Let’s start off with a rules light game of bluffing and counter bluffing. In One Night Werewolf, the players randomly select a character card. These can be villagers like the town drunk, the mischief maker, the seer, etc., or they could be a werewolf hiding in the town. In addition, three extra character cards are placed face down in the middle of the table. Once this is done, everyone puts their card face down in front of them and then closes their eyes. Now, each character has a special ability, the seer can look at one other player’s card, or two cards in the middle. The town drunk randomly swaps his card with one from the middle without looking at the new card, the mischief maker randomly swaps two other player’s cards without looking at them, etc… After all of this, everyone opens their eyes and the bluffing begins. You cannot look at your character card again, so you may not have the same one you started with.
The goal? Well, if you are a villager, you want to figure out who the werewolf is. If you are a werewolf, you do not want to be discovered. You normally have between 5-10 minutes to debat, convince and collude with one another. At the end of the time, everyone votes who they think the werewolf is. The player with the most votes must reveal their character card.
It is a very fun and fast playing game, and the company has created a free app to use with the game that helps out with all the phases of the game, including the phase where everyone’s eyes are shut.
It’s simple and quick, perfect for families with younger players. When we play, we can get three or four games played in 30-45 minutes. I cannot stress though, the free app really makes this game stand out. It has cool music and keeps track of the various stages so you can concentrate on just having fun! I would say about age 8+ is good with this game.

I’ve been a fan of the Tiny Epic game series from Gamelyn Games for some time now. I recently added this title to my library and it lives up to its name! The box is tiny, like all their games, but the game has lots of high quality pieces and card stock play mats. The rules can be a little confusing, but they do have different levels of rules to help you learn. In the game, the humans are stuck in a mall that is filled with zombies and need to fortify their hidey hole while searching the mall for weapons and items to help them ultimately escape the mall.
Now, the really cool part! You can play co-op, players taking on human roles vs game controlled zombies. You can do human co-op with another player controlling the zombies. Or you can go all out free for all, player vs player where one player controls the zombies and the others control humans. Then, of course, there is a solo player option.
The game takes about 30-45 minutes to play. It is a fun game with good replayability. So far, I’ve played it once with a group and twice solo, all games have been very fun with a good amount of strategy. Due to the rules, this is better with tweens and up.

One of my favorite games on this list. In Elder Sign, you are intrepid scholars, explorers and adventurers searching a large museum in a race against time to stop one of the Elder Call of Cthulhu Gods from awakening. Each of the rooms provides a different challenge that requires gathering the right clues and facing off with terrifying foes in order to gain tools that can help you in future challenges and the elder signs you use to keep the elder gods at bay. The  dice based, press your luck mechanic is enhanced by special abilities your characters have and items you can find in your search for the special elder signs. Can you collect enough to seal away the elder gods before that god’s doom track fills up and they awaken? There are a lot of high quality pieces and while the game relies heavily on the luck of dice rolls, there are enough items you can find and character abilities that can be used strategically to help bend luck to your favor. This is another game that has a good replay value.
The game takes about an hour or less to play and can be tense. It is pretty safe for tweens and up.

Betrayal at House on the Hill

This is all the classic B movies about haunted houses packaged into what is sometimes referred to as a Role Playing Game in a Box. You take on the role of one of several characters like the gypsie, the kid, the priest, etc. who all decide to go explore a local haunted house!
The game itself is split into two parts. The first part is completely cooperative with the players working together to find artifacts and explore the house to uncover its secrets. As you explore, items found and actions taken will result in the betrayal happening. This is a random event that results in one of fifty possible scenarios from occurring. At this point, one of the players becomes the betrayer and the real horror begins!
The scenarios for the second part are what really set this apart. There are two books in the game, one for the bad guy and one for the survivors. Once the random scenario is selected, the betrayer takes their book into another room to read what their goal is, what extra baddies they get to use and what new rule they get to use. While the betrayer is reading their scenario, the survivors read their portion of the scenario out of the survivors book. Once each side has had a chance to read up, they come back together at the table and the second half of the game begins.
If you manage to play this enough to get through all 50 scenarios then the expansion, Widow’s Walk, adds another 50. Definitely great replay value!
Now the complexity of this one, along with its longer playtime of about 90 minutes make it better for those about 13 and older.

So, as we head into this Halloween season, pick one of these games, put down your phone, tablet or tv remote and gather around the dining table for a game with family and friends!