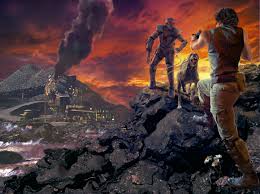 I realized after I posted part one, that I should have included more information about the setting and history.  So I’ll take a bit of a break on the rules and give you some back story…

In part one, I did include the intro to the deathlands wiki page. So you know that in this setting world war three happened in January of 2001. A war that is now referred to as skydark. Below, I’ve organized a few bits of information on the world after skydark.

Let us start with the basics. These are a few of the more common slang used in the Deathlands. This list is far from complete though. A more complete listing can be found at the Deathlands Wiki page.

Barony – Larger villes or a region with several villes under one ruler.

Barons – Rulers of villes or baronies. They either inherit the position or take it by killing the former title holder.

White Coat – The name given to all pre-dark scientists, whom most people blame for causing skydark.

Sec Man – Security man. These are the hired guns, often thugs, of the barons. They are usually cruel, bloodthirsty murderers.

Mutie – The name given to any mutant creature. This is a very derogatory term.

Wag – Any vehicle other than motorcycles. Military vehicles or vehicles that have been heavily armored and weaponized are called “war wags”

Brief Description of the Deathlands.

(Copied from the Deathlands Wikia).

“Most of the United States was changed. Deserts in Texas, Arizona and New Mexico became fiery nuke hotspots where storms carrying rain of undiluted acid howled in from the Gulf. Most of California had slipped unprotesting into the seething Pacific.

On the East Coast, the big cities crumbled in the endless rain. From the lawless elements rose a new breed of leader, barons who ran their own fiefdoms like medieval lords, paying armies of mercenaries to protect and expand their borders. In the middle of the country, known as the Deathlands, civilization was reduced to several scattered communities linked by a frail network of poor roads. Along these roads came the merchants, trading in food or supplies or medicine or blasters, and roving bands of freakish muties that set ambushes and raped and killed. And, on occasion, indulged their taste for human flesh.”

So, basically it is now about a hundred years since Skydark. The landscape is forever altered and blasted. But humanity has managed to claw its way back from the brink of extinction. A feudal society of cruel and often deranged barons control most of the larger city-states. The smaller villages or villes are often ruled by power mad security bosses or sec bosses as they are called or else ruled by a typically ineffective counsel.

Areas east of the mississippi tend to be more populated than the regions west of it, though there are pockets of communities.

The plant and animal life has changed drastically since skydark. Here is an excerpt from the Deathlands wiki page over on JamesAxler.com.

“The nuclear, chemical, and biological weapons used during Skydark have had a profound effect on the flora and fauna of Deathlands, resulting in everything from gigantism (larger than normal versions of plants or animals) or dwarfism (much smaller versions) to completely new species that breed true.“

Some of creatures encountered in the Deathlands include giant mountain lions, wolves and bears. In each case they were anywhere from two to four times the normal size. One mutant bear was twenty feet from shoulder to rump. Mutant squirrels that are about twice the size and have viciously sharp fangs and claws. They are pack hunting meat eating squirrels of terror!!

Various insects have seriously benefitted from the mutations. Such as cockroaches the size of house cats and possessing ant-like mandibles. Or Bees the size of baseballs and as aggressive as upset hornets.

Plants have also become dangerous to be around. There is kelp near the oceans that have tiny spines along its leaves that allow it to grab ahold of victims swimming by. Then there is grass in certain areas called Needle Grass that grows in clumps in dry climates. This grass is nearly as strong as iron and razor sharp. Injuries almost always become infected, often resulting in amputation of the limb.

Now this is not to say that everything can kill you, but a lot of things can!

Travel is usually done with old, rebuilt and cobbled together pre-dark vehicles. Vans, cars, off-road vehicles and military vehicles are all common in the Deathlands, though they look more like Mad Max styles vehicles. Motorcycles are used but are less common due to the fact far less can be carried by them.

Weather can be unpredictable at times, and acid rain storms can pop up suddenly. These storms can have acid rain that blisters the skin on contact or, rarely, be strong enough to melt the flesh off the bone in a matter of minutes. In the north, powerful snow storms with hurricane force winds and drastic temperature drops can occur. These storms can take the temperature from 10 degree fahrenheit to -40 in under an hour. The following dawn after the storm usually sees the temperature returning to normal.

As the baronies and villes began to spring up, a currency was again re-established, called jack. Jack typically is soft metal stamped with the ville’s logo or emblem. Often large trade caravans will issue their own jack when dealing with smaller villes. For game terms, jack is usually universal except in larger baronies where they may offer an exchange rate favorable to the barony, typically exchanging foreign jack at 80% of its value.

Another common item found in most villes is jolt. An alcoholic drink that contains mescaline and heroine. It can often be used as a trade currency, keeping its value from ville to vill and barony to barony.

Then there are bullets. These are universal currency. The more common rounds, like 9mm tend to be worth more than less common ammunition. Although, large military ammo like 7.76 rounds are more valuable still. In my next post, I’ll include a chart for ammo types and their relative worth.

Most of civilization has coalesced into small city-state pockets of humanity called baronies. The vast majority of all baronies are run by powerful and corrupt (and frequently deranged) men. About half of all the villes (smaller settlements) are also evil or corrupt in some way. There are very few truly benign villes and fewer friendly baronies that exist in the

Deathlands. In general, villes have anywhere from ten to about a hundred people whereas baronies will have at least a hundred people and typically range in the two to four hundred range. Large baronies can have a thousand people or more, though these are fairly rare.

Both of these are a common fact of life in Deathlands. Most prostitutes are slaves, though not all. Slave labor is extremely common in most baronies and is common enough in even the smallest of villes so as to not be frowned upon. It would be best for the GM to figure out beforehand how detailed these practices and situations are explored. If either makes any members of your gaming group uneasy, try to minimize or even remove them completely, though their removal will impact the general atmosphere and flavor of the setting and the novels it is based off of.

Well, there’s a bit of the setting and what survivors in this blasted future can expect to encounter.

Much more detailed information is available through the James Axler Wiki.

You can also go to the Deathlands Wikia page.

Next time I dive back into the rules!