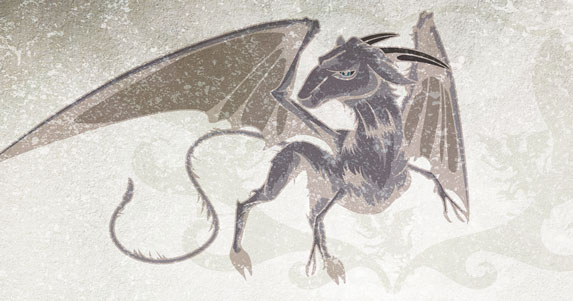 Welcome to the next installment of Savage Cryptids of North America!

Author’s note: This series looks at the various North American Cryptids as if they were real, tangible beings that have managed to elude scientific observation. Many of the creatures I will be featuring have appeared in other Savage Worlds products. Often times they have been altered and tweaked to fit that particular setting or to make them more interesting or challenging. My interpretation tries to stay closer to the available lore I could find on each.
I hope you enjoy this series and like my interpretations of these wonderfully imaginative creatures!
NOTE: Updated to the new Savage Worlds Adventure Edition!

This strange cryptid has haunted the Pine Barrens of New Jersey since the early 1700’s. Legend has it that a Mrs Leeds was pregnant with her 13th child. Her husband was a drunkard and not able to really support her or their children. In a moment of frustration she cried out “This child be the devil!”. A few months later, she goes into labor on a stormy night. The birth went well and the child by all accounts looked normal. Within an hour after childbirth, the child began to transform right before her eyes.
The child began to grow at an alarming rate, growing horns, leathery, bat-like wings, vicious talons and a combination of fur and feathers all over its body. The eyes began to glow red as its face gnarled and twisted into a horrific visage. The creature attacked its mother, killing her then lashed out at the midwives that helped deliver it, tearing them limb from limb.
Since that time there have been reports of this creature throughout the Pine Barrens by many respectable people; officers, politicians, farmers, teachers, and many others. While it has rarely taken any human prey, it has been blamed for dozens of missing and slaughtered livestock and house pets all around the region.
The most fantastic eyewitness account comes from 1909 when in the month of January over the course of several days there were reports all throughout the area complete with markings on barns and trees and tracks in the snow. The tracks were in the snow on the rooftops of houses, crossing several homes in a line, as if it was leaping from rooftop to rooftop. These sightings were seen as far as the cities of Camden and Philadelphia, where police in both cities fired upon the elusive beast. Regional schools closed for several days as a precaution. During this period, reports all over the affected region came in of missing livestock, most frequently chickens but also included sheep and a few cattle.
Since then, there has not been such a widespread outbreak of sightings though sightings and reports of missing animals still happen a couple of times each year.

Attributes: Agility d8, Smarts d6 (A), Spirit d6, Strength d8, Vigor d8
Skills: Athletics d8, Fighting d8, Notice d6, Stealth d10, Survival d8
Pace: 6; Parry: 6; Toughness: 6
Special Abilities
Flight: pace 12
Claw/Bite: d6+Str
Bloodlust: The smell of blood drives the Jersey Devil into a wild frenzy. Once anyone takes a wound in the presence of the Jersey devil, the creature frenzies. While frenzied, it can make two claw attacks and a bite attack at any adjacent targets at a -2 to all attacks.
Fear: Anyone seeing the Jersey Devil must make a fear check.

If you want a tougher Jersey Devil that also fits the origin story a little closer, make these two modifications:

The Jersey Devil was originally human and was altered by demonic forces. So remove the animal intelligence flag and add this:
Demon: +2 to recover from being Shaken; Immune to poison and disease; Half-damage from non-magical attacks except for cold iron.

Next time, I tackle Sasquatch, Momo of Missouri, Swamp Stalker of Boggy Creek, Wild Man of Navidad, Grassmen of Ohio, Skunk Ape of Florida and the Native American Genoskwa.

Guess what they all have in common??