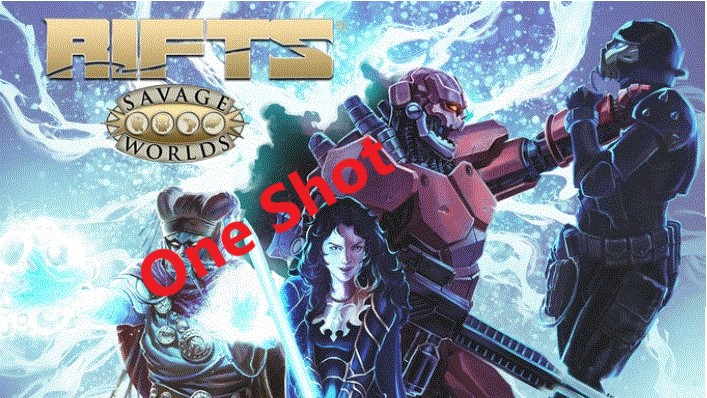 This was a random encounter I came up with literally off the top of my head while “winging it” in one of my Savage Rifts Sessions. It is a combination of my own nightmare, elements of the film Odd Thomas, and source from my player’s character backgrounds. I have removed quite a bit of character specific information to generalize it and allow it to better fit anyone’s campaign.
Super quick background on this: The group I had started out in ETU and found themselves magically transported to the far future of Rifts earth. They all then transitioned into iconic frameworks of the SW Rifts setting. This encounter was originally custom made for the players with the town feeling like the home they were torn from. In my game, one of the PC’s tried to call home to their mom only to have the “mom” on the other end being attacked by “something”. This quickly turned into a little horror movie for the players. By the end, they were not 100% sure if it was all manipulation from the thing in the rift (which it was) or if they were really back in their own time and the PC’s mom being really attacked (which didn’t actually happen). The next couple sessions had the PC in question trying to get to the truth.

GMs Info: This is a random event from a rift that opened up to a pocket dimension with a creature almost beyond comprehension. The creature can change the appearance of the pocket dimension to look like whatever it wants. It creates places that it thinks local life would find interesting and intriguing. In my home game, my players started out as ETU students and were transported to Rifts Earth during the first adventure in Degrees of Horror, with the ritual transporting the entire gymnasium to the future. So the creature made the area of its pocket dimension look like a small rural town. This encounter should be custom tailored to fit your group. Whatever might entice them. It could be an old, pre-rift town that they are fascinated with, or an unusually well outfitted modern town with a quaint, small town feel.

Everything is to build slowly. Try to sound sincere and welcoming when describing the town, make it welcoming. Then slowly start to drop in a few odd events in; a strange comment, something seen at the edge of their vision. That sort of thing. This should ramp up to the climax with the PCs running for their lives.

Once all the players cross over, the town vanishes as if it had never been there. Just the same wilderness that is all around them.

The random rift has closed.

The Shadows: They are not really dangerous. They are like the small fish that follow sharks, with the tentacled horror being the shark. The people are mental projections of the creature. Visually, they look like the shadows in the film Odd Thomas though more humanoid looking with four arms.